Within the United States, large, national museums as well as small, local ones display World War II memorabilia. Mannequins, for example, wear the uniforms of servicemen and women. In glass cases, museums display military gear and personal belongings from the era, such as diaries, letters and ration books. Aside from these public institutions, private homes also house World War II memorabilia. Some families have held onto items from the war years. Photographs of relatives in uniform hang on a wall or stand on a shelf. The public museum displays and the private holdings remind Americans of a time when war dominated the national scene. If placed in their historical context, the memorabilia can teach us about the history of that era.

In this section of our web site, we will share stories of such “pieces of history.” Members of the World War II Generation gave our nonprofit some of the memorabilia. We purchased other items. Among them are the following:

Pictures, some in albums held in place by small, black, corner tabs; others stand alone in frames, professional photographs of a moment in time

Family letters such as the correspondence between a husband and wife, separated for close to four years because of his Navy service

Albums kept by servicemen and women, including one created by an Army nurse who served overseas

A Purple Heart bestowed upon a Jewish American paratrooper who dropped behind enemy lines on D-Day, only to be captured by the Germans and held for the rest of the war as a POW

Military uniforms, including one worn by a Pearl Harbor Defender who served in the USMC

A print of Old Glory flying on a pole, given as a gift to the New Mexico parents of a soldier. Their son survived the Bataan Death March, only to be held for over three years as a Japanese prisoner of war. The print hung in their home during that time. 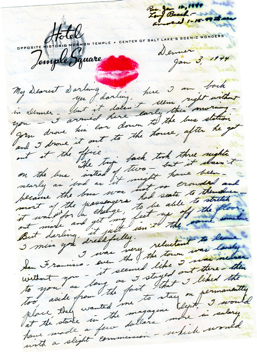 Bob and Alice Brown celebrated their first wedding anniversary exactly three weeks after the Japanese attack at Pearl Harbor. Some six weeks later, Bob enlisted in the Navy. During the war years, the couple saved “pieces of history.” The result is what the World War II Experience identifies as “the Brown Collection.” It contains letters, documents, photographs and other memorabilia that belonged to Bob and Alice. Together, the collection consists of 155 mementoes that speak to the life of a sailor and his wife. Eighty-four percent of the letters date from when Bob served on the heavy cruiser USS Louisville. The documents include the stencil Bob used to mark his Navy belongings, a two-page “salutation code” Bob created so he could covertly share his ship’s location with Alice, and a handwritten, annotated chronology of the Louisville’s movements. Photographs of Bob with some of his shipmates allow readers to put a face to a sailor’s story. Read an account here, based upon this collection, of a World War II couple.